From Inside the Mahasi Meditation Center 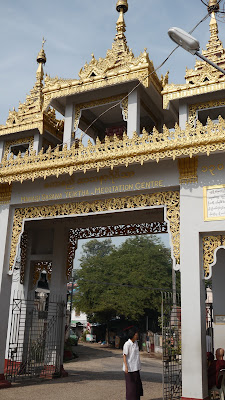 Well, here I am, a little more than halfway through my 9 days (7 full) at the Mahasi Meditation Center in Yangon, Myanmar, deciding to pull out the old tablet and type in some thoughts here. Why? Well, I have never gone to such lengths to produce some sort of writing at a retreat or during a course, because usually it is strictly forbidden and I have something invested in being there, but this is different.

During this stay at the center, I could honestly care less if they kicked me out tomorrow or even tonight for that matter. I never really planned to come here, I have nothing invested in it. I suppose it would have been easier to say that the short list of rules and guidelines never mentioned anything about not reading or writing, but I also find it important to indicate my overall attitude at this point which is relevant to the purpose of this work.

First of all, this is not my dream-come-true meditation center. Every night, they play these recordings on cheap speakers all over the monastery, blasting traditional Burmese music mixed in with some non-melodic chanting and various other tracks that make it quite difficult to focus. When I arrived, I had the complete absence of a welcoming. There was no tour (it took me about 3 days to figure out what was where) of the over 100 buildings on what is essentially a meditation campus, I wasn't given any sort of talk, not even the "Information for Foreign Yogis" pamphlet that I saw a Japanese guy with. I was just shown to my room and given the key. The rest I had to figure out for myself, and luckily, my next-door neighbor, a monk from Thailand, has been very helpful to the extent that we have figured out how to communicate with each other.

With the exception of a short bout of water-borne illness on the second night and a near argument with the "teacher," no big deal, he's just the master meditation teacher of the monastery with a PhD in Vipassana Meditation and whose picture can be seen blown up all billboards all over the city, I've had a somewhat uneventful and painstaking first 4.5 days, trying (unsuccessfully) to keep up with the most gruelling schedule I've ever seen, which includes only sleeping from 11pm to 3am and a minimum of 15.5 hours of meditation per day. Needless to say, I've been having a bit of a tough time and even considering leaving.

I planned to spend my 4 weeks in Myanmar traveling around, and it wasn't until halfway through my trip that I had the idea to find a place to sit for the last week or so. It's not that I'm not taking it seriously though. If anything, perhaps I have been taking it too seriously. In a place that seems completely devoid of sympathies for English speaking foreigners and seeing as how I am in the only non-Asian in the men's foreign dormitory, it hasn't been easy, and I've just been a little more on edge than usual. So after I a walked out of my interview with the teacher today,  I finally had an experience that I find is worth sharing.

So what was my experience?

Well, I guess I've really been trying to get this technique down, being that it is essentially the same as the 21 day course at Wat Chom Tong I took in Thailand last month and I have been working with it ever since. Now, with the teachings coming straight from the book by Mahasi, the man with the master method, known world-wide as the Mahasi Method, I have been striving even harder to put the pieces together. It's a tough thing, this striving business, trying to get it just right. If you strive too hard, you won't get anywhere. Not enough, and again, you won't get anywhere. You have find the illusive "middle way," and that isn't always easy. So I came back to my room, after having failed to get my question even acknowledged by the teacher, and picked up Mahasi's "Fundamentals of Vipassana Meditaiton" that is available here for sale at the front office, hoping to get some more insight into this practice of insight meditation.

If anything, I became more frustrated at Mahasi's assumptions about how long the process should take to see certain results, and finding the whole thing to be very results oriented in general, focusing primarily on reaching Nirvana instead of peace and understanding in a more practical sense. I have always been able to trade that far-reaching goal of enlightenment for the practical goal of improving my life one day at a time, but being at this center has made me lose that sense of balance a bit.

After reading for a half-hour or so, I put the book down and hesitantly climbed the stairs to sit under my mosquito net on the top deck to get back to work and in the meantime, something happened. When I put the book down, I was disinterested. I was frustrated and myriads of judgements were rolling through the projector onto the big screen of my experience. I wasn't even trying to edit them. I wasn't even trying to practice anymore. On top of that, I had no energy, and no motivation to keep practicing. As my Malaysian friend Dom said at the last course, "My fire was out."

Right about the time when I sat down under my net, the shift occurred. I think it came in the form of an idea. Instead of continuing to practice the way I had been instructed by the teacher, I was going to go my own route. I found his teachings, on account of his limited ability to speak English, somewhat of a broken record, and didn't take in to consideration the situation I had found myself in. Sometimes, it's best to customize the practice in order to address these things. Had I been able to speak Burmese or if his English was better, we probably could have gotten somewhere together, but as it was, I decided to take matters into my own hands.

I was feeling a little overwhelmed with the practice, and my concentration in the last couple days has been waning significantly. I needed a change. So I decided to break down the practice into more focused sections that I could analyze. As a whole, the practice is to note the rising and falling of the abdomen until some other element of your direct experience takes the center stage in which time you note whatever that may be before returning to rising and falling.

In Buddhism, the only things you can experience are what comes in through the 5 normal senses and the 6th sense of the mind. With so much stimulation, it can be difficult to not just float around in space and not really get any work done. So the first hour, sitting outside surrounded by constant sounds of insects, birds, music, etc, I chose to single out the experience of hearing. I've practiced this way before, singling out the experience of hearing, but not while also noting that experience every time I heard a noise and not for an entire hour. Basically, I was noting "hearing" almost the entire time, as there was never really a lack of sounds for sensory input.

I was amazed at how much energy and concentration I had. It was like it came out of nowhere. The whole process was suddenly fun and exciting. Of course, other sensations, such as pain or thoughts would arise, but I was able to quickly name them and return to the experience of hearing. The hour went by pretty quickly and instead of taking a break, I went straight into my second hour and decided to focus only on the rising and falling of the abdomen. Normally, you are instructed to be quite lose with allowing the other sensations to arise during this practice, but for this session, I wanted to really concentrate only on the movement of my belly. Again, I would quickly name other "distractions" and then return immediately to the breath. This time, I went inside, which was much more quiet, and that helped to really single out this different experience. And finally, I went back outside, to focus on sensations in the body. By the end of the third straight hour, and 13th hour of meditation today, I was losing my steam, but still made it through fairly easily.

At the conclusion of each session, I inquired into the my experience as to whether or not I was able to find anything permanent or substantial. The answer was inevitably no, and gaining insight into the impermanent and impersonal nature of arising phenomenon is exactly the purpose of practicing vipassana meditation. When I asked myself, for example, if the thousands of "itching," "tingling," and "pain" sensations that I noted during the mindfulness of body exercise were evidence of anything that represented permanence or my "self," I sort of just had to laugh. "Hopefully not," I thought to myself.

Singling out the different elements of my practice really helped me to understand what it is I am trying to do here, and that is basically developing a trigger finger on the spotlight of awareness, quickly "catching" any arising phenomenon in order to not be swept away by them. It's too easy for a thought, a sound, or a pain in the body to lead to a long drawn out train of thoughts that can last for what seems like an eternity. Being able to catch them, as my friend Bryce did to deer with his headlight while we were camping once in Montana, and say "gotcha," turned out to be pretty rewarding. Tomorrow, I hope to continue practicing in this manner to include an hour of just watching mental phenomenon before I finally put them all together. Seeing just how involved one sense is, it is now no wonder to me why I was feeling overwhelmed while working with them all simultaneously (with the exception of taste and smell, which rarely come into play during a sitting meditation).

I hope that this new sense of curiosity and excitement for what can be a very tedious and boring practice will help to get me through the next 4 days unscathed, but in no way do I expect that to happen. It's going to be tough, here all alone, in silence and solitude, with nothing to face but the harsh reality of my own music. I guess that's why I'm here though, so I might as well be grateful for the opportunity to do so.

The birthplace of the Buddha. 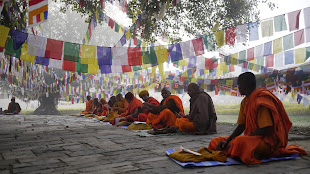